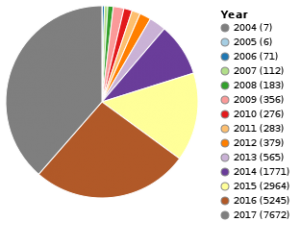 An explosion of games can mean more choice for the consumer, and more revenues for Valve, but it’s anything but good for developers; especially ones that care about their products and won’t deliver bottom barrel shovelware.  The same thing happened with the atari 2600 in the first video game crash.

Loose quality controls led to declining game quality while prices stayed where they were when games were good.  A good title that cost more money to develop than a bad title sold for the same price on the same platform, frustrating the good developers.  The ecosystem was saturated, and more developers competed for the same limited consumer spending.

The result was a collapse of the game industry and the rise of Nintendo and hardware manufactures strict control of their libraries.  Due to this control, consumers had less choice, and the games they did have to choose from had better graphics, less bugs, better investment from the financial system; in short everyone was happy.

When Steam started, it was a platform to distribute a few valve originals, and keep drivers and multiplayer games up to date.  It wasn’t until Valve stopped making games and started focusing intensely on publishing that quality went down.  Valve didn’t have to care about making quality games, it was just a middle man with a no returns policy.  If the customer had a legitimate grievance and tried to vote with thier wallet, it wasn’t like they could get nearly as many PC titles anywhere else.  Reddit said EA Games was evil and spied on them.  Reddit says nothing bad about Steam, except when mom makes it shower.

Like it or not, Valve needs to do something about the deluge of incomplete voxel art games, minecraft rip offs, and general asset flips.  The fees Valve charges do not deter dedicated con artists, so a human employee of Valve should vet the games, not possible bot curators on the platform.  Existing titles should be given a year to comply with a fee for vetting, or face removal.  If the devs of existing titles truly didn’t make an asset flip or shovelware, they’d pay the fee to Valve.

This site uses Akismet to reduce spam. Learn how your comment data is processed.